A mobile app for an enterprise bridging the gap on all
the heirarchys in an organization.

People spend a lot of time on mobile. With data getting cheaper and faster(well at least in India), we can leverage it for employee engagement in an organization. Tikkle was focused on employee engagement and mobile learning app by a parent company called engage4more. It’s a mobile app to communicate and upgrade the employees, remotely and consistently.

The branding for Tikkle was done by their Senior Art Director and my goal of this project was to design and carry out the same branding and aesthetics across their products which in this case was their mobile app.

Employees of a medium to large scale organization or a company.
There would be two age groups

empathizing with the audience

I had a small chat with each of my target audience group to get a sense of what they feel to be in a company and asked for the pain points revolving around tikkle. Here are some of my observations after empathizing with them.

With the help of my client, key engagements in a company via Tikkle were identified as described below

Feed(Buzz): Newsfeed of posts from various heads posted through Tikkle's CMS platform in the web

Quizzes: A method to help employees to keep up with the current trends and markets

Training(iCan): Education slides to have regular inflow of knowledge

Live streams: Interactions between the heads of the organization with their employees

Some of the attributes for the key engagements

I started to understand each engagement and map out its attributes. These identifications gave me a virtual image and a mental model of what elements the mobile app needed.

Before digging into the wireframes and designs, I wanted to understand what other companies were doing in this space. I had to resort to Google for my target audience and competitors like Facebook for Workplace and Microsoft Kaizala.

Due to the limited time, I worked with my client and was able to identify some of the user needs and behaviors which they had done during their branding phase.

Now, knowing the end-users and the space I'm building in, I asked myself the following questions

I started visualizing the content to be consumed in the form of cards which would be the main elements of the app.

One thing I had in mind was not to reinvent the content curation/consumption wheel since it would share the same space to that of Facebook and other social networking apps. I didn't want users to feel the need to learn and get used to another app.

Some of the initial wireframes done through client discussions

After observing the branding guidelines set by the Senior Art Director, I played with the interfaces, iterated, implemented the feedback, re-iterated. I really liked how the brand included vibrant colors which were part of Tikkle's ethos i.e make work fun and not stressful. I explored gradient masks for the images, color popping elements and kept it simple, familiar and easy to use. 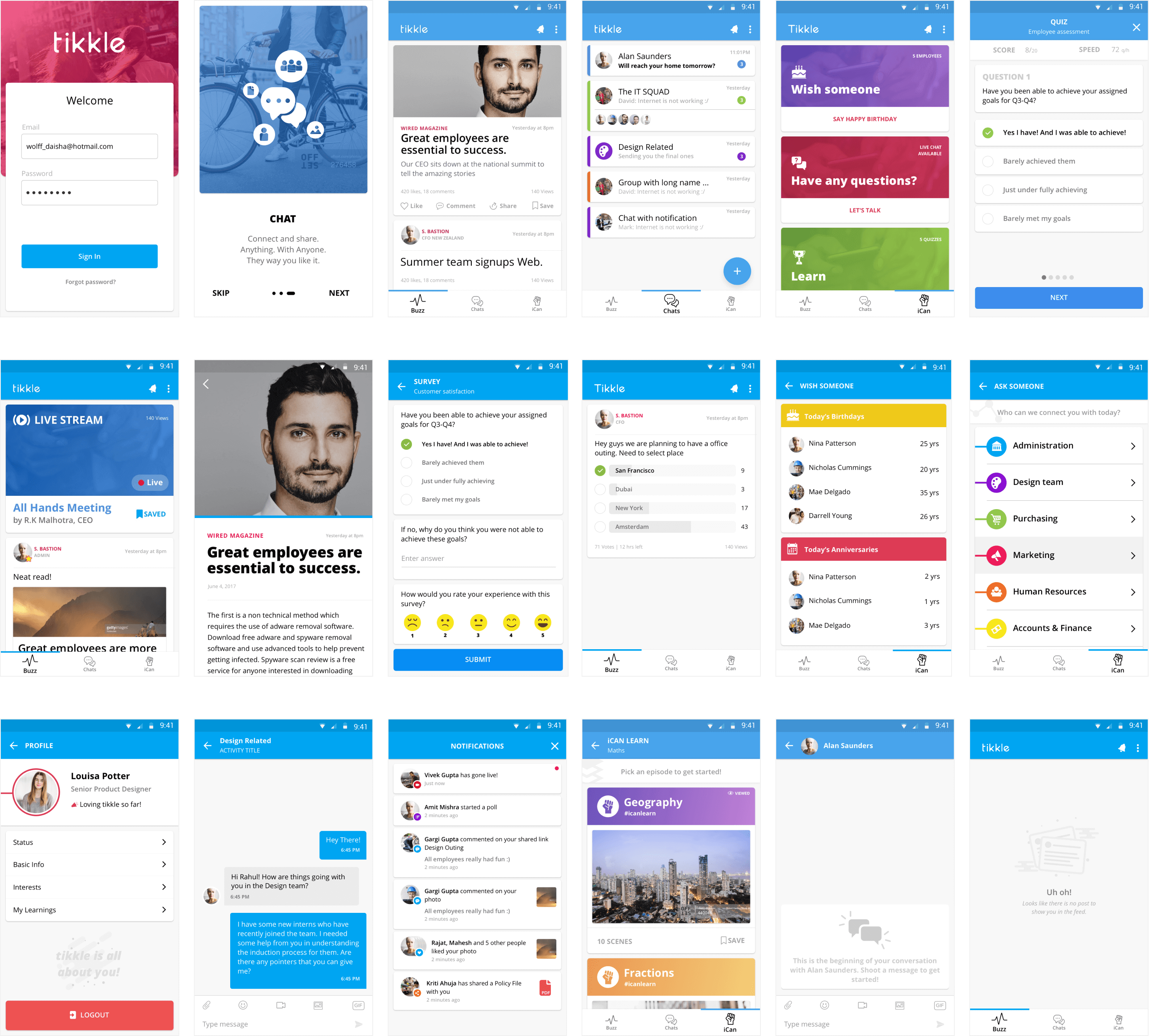 The engagements included people to use quizzes, surveys, education modules. But how can we drive more of these engagements to the employees?

The client suggested to have the training, surveys, livestreams, modules etc onto a separate tab called iCan. But there were no motives for users to go to the iCan screen. Since I had the idea of implementing cards approach for the feed(Buzz) as a central way to consume the content, it would be intuitive to introduce various types of cards apart from the text, photo, videos, articles etc in the feed(Buzz).

This was one of the most detailed projects I've worked on since there were many screens involving different use cases which would help the developer build without any hindrance.

All in all, there was a challenge on keeping the designs consistent with the brand guidlines and bring in the brand ethos which I felt could do better after reviewing the project later. But hey, will designers always be fine with their previous work?